Satan works through the false prophet, who has an army of soldiers that are spread around the world, who work tirelessly to push us into their One World Government for the antichrist. They’re behind the Antifa (anti-fascist) movement, Black Lives Matter, leaders of the District of Columbia, governors, police chiefs, corporate CEO’s, etc.

They’re using all sides to create a huge problem of violence, to cause an emotional reaction, to then offer a solution of military police to patrol the cities. This is all part of the evil one’s plan to get troops on the streets, to later be used for more nefarious purposes.

Our calling isn’t to take to the streets to battle the evil ones physically. We’re called to be Messiah’s militant soldiers, who fight against the enemy in the spiritual realm; to pray against the power of the enemy and his army. 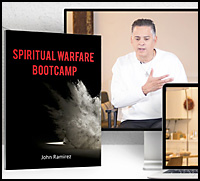 John Ramirez was a Satanist who was redeemed for Messiah’s kingdom. He can show you how to become a Spiritual Warrior, to pray against the enemy and take out the works of darkness.
Click here to learn about the Spiritual Warfare Bootcamp from John Ramirez.

The battle is getting fierce and many lives are at stake. Our Father is using the enemy to increase the pressure on the world, to draw the lost unto Him; to drive believers to their knees, in repentance for being lukewarm; and to test the faithfulness of His followers.

Instead of shrinking from the events which are taking place in the world, we should be taking up spiritual arms; knowing that what the enemy intends for evil, can be used for good in our Father’s kingdom!

When tough times come, people search for answers. The fields are ripe for the harvest of souls. Instead of wishing to escape the war, we should be rushing headlong into battle, for the glory of our King!

He wants us to fight to the end, whether that means that we will be killed for His glory, or that we war against the enemy until He returns.

Be strong and of a good courage, fear not, nor be afraid of them: for the LORD thy God, he it is that doth go with thee; he will not fail thee, nor forsake thee. Deuteronomy 31:6

The enemy may seem invincible, but just like Goliath, it can be taken down with the sword of truth, and the power of our Warrior Messiah. For the Lion of the tribe of Judah will prevail through His saints.

Wherefore take unto you the whole armor of God, that ye may be able to withstand in the evil day, and having done all, to stand. Stand therefore, having your loins girt about with truth, and having on the breastplate of righteousness; And your feet shod with the preparation of the gospel of peace; Above all, taking the shield of faith, wherewith ye shall be able to quench all the fiery darts of the wicked. And take the helmet of salvation, and the sword of the Spirit, which is the word of God: Praying always with all prayer and supplication in the Spirit, and watching thereunto with all perseverance and supplication for all saints. Ephesians 6:11-18

The question is, what is your legacy going to be?

Those who serve Satan pray against you saints and they cast spells over your neighborhoods. But you have more power than them and their god.

You are of God, little children, and have overcome them: because greater is he that is in you, than he that is in the world. 1 John 4:4

If possible, form a team of two or three people, to walk around the area.

Verily I say unto you, Whatsoever ye shall bind on earth shall be bound in heaven: and whatsoever ye shall loose on earth shall be loosed in heaven. Again I say unto you, That if two of you shall agree on earth as touching any thing that they shall ask, it shall be done for them of my Father which is in heaven. For where two or three are gathered together in my name, there am I in the midst of them. Matthew 18:18-20

Anointing oil was prevalent in the times of the Bible. Its uses were many – from blessing vessels for the Heavenly Father’s purpose to anointing kings, prophets, and priests to show their ultimate service to our Father. Extra virgin olive oil can be used. You can add an essential oil added, such as myrrh, cassia or sweet cinnamon.

Combined with prayer and faith, the holy anointing oil becomes a powerful weapon, to release the power of the Ruach Spirit.

Before you walk around your area, pray for protection and anointing.

Then anoint your forehead with the oil, which marks you for the Father’s service. The aroma will heighten your senses as you walk. When walking around your property, neighborhood and city; put a drop of the oil on the corners of those areas, and say a prayer to mark the area as set-apart and protected.

More than the act itself, the faith and prayer behind your actions, cast down strongholds in the heavenly realm. You can walk around the area six days in a row like Joshua, and then on the seventh day walk around it seven times, and then make a shout and blow a trumpet, to make the strongholds fall. You can combine your Antisa prayer walking with fasting.

If called to do so, you can walk around the perimeter of where Antifa protests are taking place, dropping anointing oil as you go, praying as you go, binding the power of the enemy that’s in that perimeter so that it’s powerless. Pray in Messiah’s name.

Far above all principality, and power, and might, and dominion, and every name that is named, not only in this world, but also in that which is to come: And hath put all things under his feet, and gave him to be the head over all things to the church, Which is his body, the fullness of him that fills all in all. Ephesians 1:21

Here’s a sample prayer to battle against the enemy in the area that you’re walking around and praying over.

In Messiah’s name and by His precious blood, I bind all principalities, powers of the air, wickedness in high places, thrones, dominions, world rulers, and strong men, exerting influence over this area.

In Messiah’s name, I bind and break the power of all curses spoken, all rituals or sacrifices, all divination, spells, incantations, meditations, and all sorcery or magic.

As you’re walking abound your neighborhood, pray for the people who you know, look out for people who need a smile and a prayer, and pray for salvation for your neighbors. Let the Spirit guide your thoughts as you may be prompted to intercede for people you don’t even know.

There are people stuck in sex trafficking, child abuse, spouse abuse, drug addicts, etc., and the Spirit may prompt you to stop and pray in front of a house. The request from the Spirit may not make sense to you, but the Spirit is moving in that persons life, and they need your intercessory prayer.

Thank you Father, that no weapon the enemy forms against us shall prosper, because we are covered by the blood of Messiah, and You have put all things under His Feet.

No weapon that is formed against thee shall prosper; and every tongue that shall rise against thee in judgment thou shalt condemn. This is the heritage of the servants of the Lord, and their righteousness is of me, saith the Lord. Isaiah 54:17